Home
Products
About Us
Factory Tour
Quality Control
Contact Us

It is able to carry approximately twice as much current as a conventional aluminium-conductor steel-reinforced cable (ACSR) cable of the same size and weight, making it popular for retrofitting an existing electric power transmission line without needing to change the existing towers and insulators.

In addition to the labor and materials savings, such an upgrade can be performed as a "maintenance and repair" operation, without the lengthy permitting process required for new construction.

ACCC is designed to operate continuously at elevated temperatures and has excellent sag characteristics through out the operating range. ACCC is the right choice if reconductoring of the existing lines are required to enhance the transmission capacity. This conductor offers Very low line losses and excellent self-damping properties.Because of it's high strength to weight ratio, ACCC can be used with long spans which brings down the cost of structures in new lines.

ACCC Conductor consists of a hybrid carbon and glass fiber core which is wrapped with trapezoidal shaped aluminum strands.

Increased Power Transfer
When compared to an ACSR that can be strung on the same towers, ACCC conductors will carry about 28% more annealed aluminum in a trapezoidal configuration giving greatly increased conductivity; the carbon core provides increased strength and virtually eliminates high temperature sag allowing more efficient operation at up to 180°C. This can double current capacity (ampacity) over the ACSR.
Reduced High Temperature Sag
The coefficient of thermal expansion of ACCC conductor at its final condition is eight times less than typical ACSR, and the ACCC core is approximately two and a half times lighter than steel. ACCC conductors sag very little due to thermal expansion which eliminates this as a significant design consideration.
Energy Efficiency
Using more aluminum with better conductivity reduces losses at every temperature of operation. When operating as a High Temperature Low Sag (HTLS) conductor, the higher operating efficiency can reduce line losses and their associated emissions by more than 35%. This results in more power delivered to be sold and can result in lower power generation costs.
Reduced Tensions on Towers
Lower initial sag at normal tensioning allows for lowering initial tensions on weaker towers and during line upratings or allows designing for smaller power towers on new lines.
Uprating lines and Building New Lines
Existing pathways can be reconductored with reduced, and often without, structural modifications; this reduces capital uprating costs and time to completion. New lines can be constructed with reduced numbers of towers taking advantage of the ACCC conductor lower sag profile, reducing tower capital costs significantly and time to completion. Often, better tower foundations can be sited due to the extra span reach, increasing line strength and reducing costs and time.
Ease of Installation
ACCC conductor installations use conventional installation methods, tools, and mostly conventional hardware; no expensive special tools are required and limited additional training is needed.
Corrosion resistance
The ACCC core resists environmental degradation: it will not rust or corrode, or cause degradation of the aluminum conductor or components. This makes it a conductor of choice for harsh or polluted environments 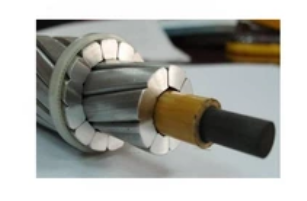